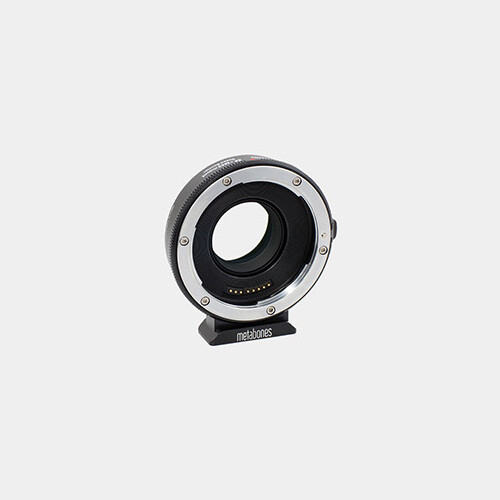 The Canon EF Lens to Micro Four Thirds Speed Booster "S" Version from Metabones is designed to be used on Micro Four Thirds cameras with an "active" mount as opposed to those with a "passive" mount and is therefore compatible with Olympus OM-D cameras, Panasonic GH4 and the Blackmagic Pocket Cinema Camera but not with the Blackmagic Cinema Camera 2.5K.

This EF to MFT Speed Booster allows a full frame Canon EF lens to be mounted to a Micro Four Thirds mount camera and in doing so, increases the angle of view by 0.71x and increases the maximum aperture one f/stop.

When a lens intended for full frame sensors or 35mm film is mounted to a camera with a Micro Four Thirds sensor, it transmits a larger area of light than the smaller sensor was built to accept and therefore the effective angle of view of the lens increases. The Speed Booster condenses light from the lens and projects it onto the MFT sensor allowing it to utilize all of the lens' light and effectively reduces the crop factor of an MFT camera from 2x to 1.07x, producing a full-frame angle of view with an MFT sensor. A corresponding increase in the maximum aperture of one f/stop makes the lens more effective in low-light situations and able to create a shallow depth of field.

Canon EF-S mount lenses are not compatible with this adapter.